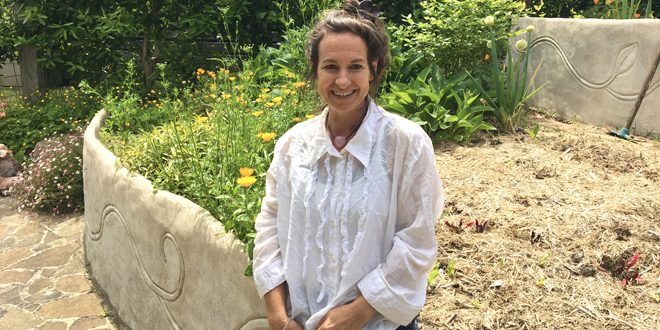 Sioux Dollman – One of a kind

Adrian and I had the pleasure of stepping inside Sioux Dollman’s world of creativity where everywhere you look your eyes are drawn to her paintings, mosaics or sculptural rendering that surrounds her home inside and out. She really has created her own little magical world.

Sioux is an only child and grew up with her parents in Hawthorn until the age of 8 when they moved to a tiny fishing village called Breamlea near Torquay on the Victorian coast. They lived there until she was 17 in a new log cabin, which was the first one built in the area. When she was 17 they moved to the colourful suburb of St Kilda in Melbourne.

Sioux felt she was born an artist. She use to get a lot of comfort from colouring books and drawing as a child. She always remembers being creative which her parents always encouraged. She would cook and do crafts with her mother from a young age. “Mum always kept a lovely home” Sioux recalled fondly to us.

Sioux is largely self taught. In the 80’s Sioux enrolled in an Art and Graphic Design course, but she found it too stuffy so she left. After leaving the course Sioux started designing greeting cards and doing life drawings on paper. She met Phil at that time and they spent 10 years doing dance party’s and organising events. They were both creative souls and would even build props to create worlds for the people attending the events. Their most precious creation was by far their daughter Emba who was born when Siuox was 28 years old.

When Sioux was 35 she took a change in artistic direction. She painted her first painting that she was happy with. It was a painting of a dove flying free in the rainbow skies in the golden age. It was a very healing painting for Sioux and it started her on a new journey into her creativity which is still evolving today.

Around the same time Phil’s mother bought them a weekend away in Warburton. Sioux felt an instant connection with Warburton. She was overwhelmed by the beauty of the place and how welcoming the community were over that weekend.

When she was 37, Sioux was going through some changes and felt she needed to take a leap of faith. She remembered how lovely the community was to her a few years prior and made a decision to move to Warburton with her daughter, Emba who was 8 at the time. Sioux said it was the first time she followed her heart.

She told us a funny story about how she found work in Warburton initially. She grabbed her folio one day and walked down to the Arts Centre in Warburton. “I am an artist and I have arrived” she told us with a laugh and they said “thats good, here you go do the lantern parade, someone just left”. Soiux had never taught before and certainly had never made a lantern so she got busy learning.

She went around to all the schools making lanterns with the kids for the lantern parade. This got her a start in Warburton. It got her a foot in the door and she went on to do the holiday programs at the Art Centre. Sioux also started running painting work shop in town.

Sioux bought her piece of land in 2006 and lived in her studio down the back of the property until she commenced building in 2009. Sioux’s home is a one of kind. She designed her home herself with the help of her Architect, Alvyn Williams. When she started designing it he said to her “You don’t have to be like a possum, your house is like an extension of you”. Sioux took that piece of advice and started creating the home she lives in today.

Her home is built from a wooden frame but she has used hay bails for insulation and also to form the shape of her home. Old tyres and recycled building materials have been used and rendered over to create structural elements like bench seats and stairs in and around the home.

The entire outside is rendered in ferro-cement. Sioux has added her own magic with a technique called sculptural relief rendering which she learnt from her Architect Alvyn. The rendered walls are decorated with sculptural designs of flowers and plants which create part of the wonder of her home. Sioux has done a lot of the hard work herself which is truly amazing.

The inside of her home is amazing to say the least. Her creativity is on show everywhere you look. There are pieces of her own art hanging on walls, mosiacs in the kitchen and her bathroom is something that has to be seen to be believed. Nothing in Sioux’s home is there by chance. She loves beautiful things and loves to be surrounded by items that inspire her. She also incorporates Feng Shui principals to create harmony and energy flow in and around her home.

Sioux has moved into more commission work recently and was kind enough to share her creative process with us. When a client first contacts Sioux for a commission they provide her with words and photos to describe what they would like her to create for them. She sometimes googles words to get images and ideas. As part of the creative process Sioux trys to step into the person and channel their energy to create a painting that resonates with them.

Soiux feels that her creativity comes from within but she is inspired by nature and the feminine. She feels she has an inner knowing and sees images of what she is trying to create well before it becomes to life. These images often come when she is meditating or if she has attended a new workshop.

Autumn is a particularly creative time for Sioux as the autumn colours inspire her. She loves to paint with reds, oranges and yellows. When Sioux is creating she has no concept of time and works for hours on end to finish a piece of art.

Sioux believes that if you have a painting in your home it should exude love, magic and beauty and inspire you. That is what she sets out to do with every painting she creates.

Sioux has created many beautiful mosaics around the Yarra Valley. One of Sioux’s well known works are the amazing stairs at the Waterwheel in Warburton. Sioux was the main artist for the project but she shares the credit with Aileen and Sandy by her side. It took over 6 months to complete with 300 dedicated community members to create the steps that lead up to the Waterwheel. The design was inspired by the Yarra River that runs through the town, the beautiful gum trees that surround Warburton, and all the animals and birds of the area. Sioux loves to work and create in groups , it brings her much pleasure.

Sioux has also been featured in the beautifully written book called From This Place which highlights local artists in the Yarra Valley. It was written by local writer Lindy Schneider and the photos are by Angela Rivas.

Sioux is a one of a kind. Her creativity is seemingly endless. Sioux believes your home is an extension of you and this is never more true than at Sioux’s home. She is so full of energy and is so vibrant. Adrian and I laughed when she said “I still haven’t decided what to do with my life but I love to create worlds”. She has produced and created so many amazing works in her home, on canvas and out in the community. It truly was a pleasure being invited into Sioux’s creative space.

Hi, I'm Noelene, I've spent the last decade or so dedicated to raising 3 beautiful children, and now they are getting a little older I'm enjoying writing about the wonderful people and places of the Yarra Valley where we live.
Previous Yarra Valley News – Our Story
Next Wandin Custom Car & Bike Show

Jena Bedson – A Way With Clay 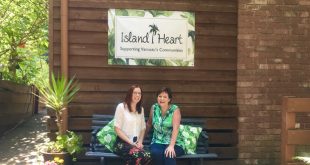 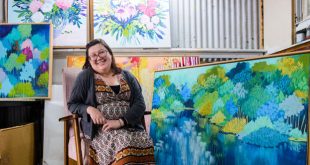 Clair Bremner is a wonderful local artist who lives in Warburton, Victoria. Clair is internationally recognised artists but has remained very humble.